Kyle Hornbaker talks about methods for dealing with a laying worker.

Many of us have heard it and some of us have not. But do we really understand the dynamics of what is actually going on? I will share what I have learned and, through my research, the opinions I have formed.

I think it is important to first discuss what the laying worker issue is and what causes it. Laying workers are simply worker bees whose ovaries develop and give them the ability and the inclination to begin laying eggs. However, because these worker bees were never mated, these eggs are unfertilized and only have the opportunity to become drones. It has been long theorized that it is not uncommon for healthy colonies to develop a few laying workers here and there. The issue I am discussing is much more dire. When a colony becomes queenless for an extended period of time (many believing around 3 weeks), the colony can develop several laying workers. Many believe that the lack of pheromones produced by open worker brood is what triggers these laying workers to be.

The typical sign for a laying worker issue, once your colony has been queenless for an extended period of time, is the presence of several (more than 2 or 3) eggs within each cell. These eggs will also likely be attached to the side or bottom edge of the cell instead of the eggs that are almost perfectly centered when laid by the queen.

This situation can be very challenging for several reasons. Most importantly, laying workers produce enough “queen-like” pheromones to make introducing a mated queen successfully very difficult. Furthermore, as discussed above, in this situation there are likely hundreds of laying workers residing in the colony. Because the workers never mated, there is no physical distinction between laying workers and non-laying workers. Also, because laying workers only produce unfertilized eggs, they have no means to raise a new queen. They will only produce drones that will emerge only to further deplete the colony’s resources. Because of these issues, a colony with a laying worker issue is doomed to fail unless intervened by a beekeeper. 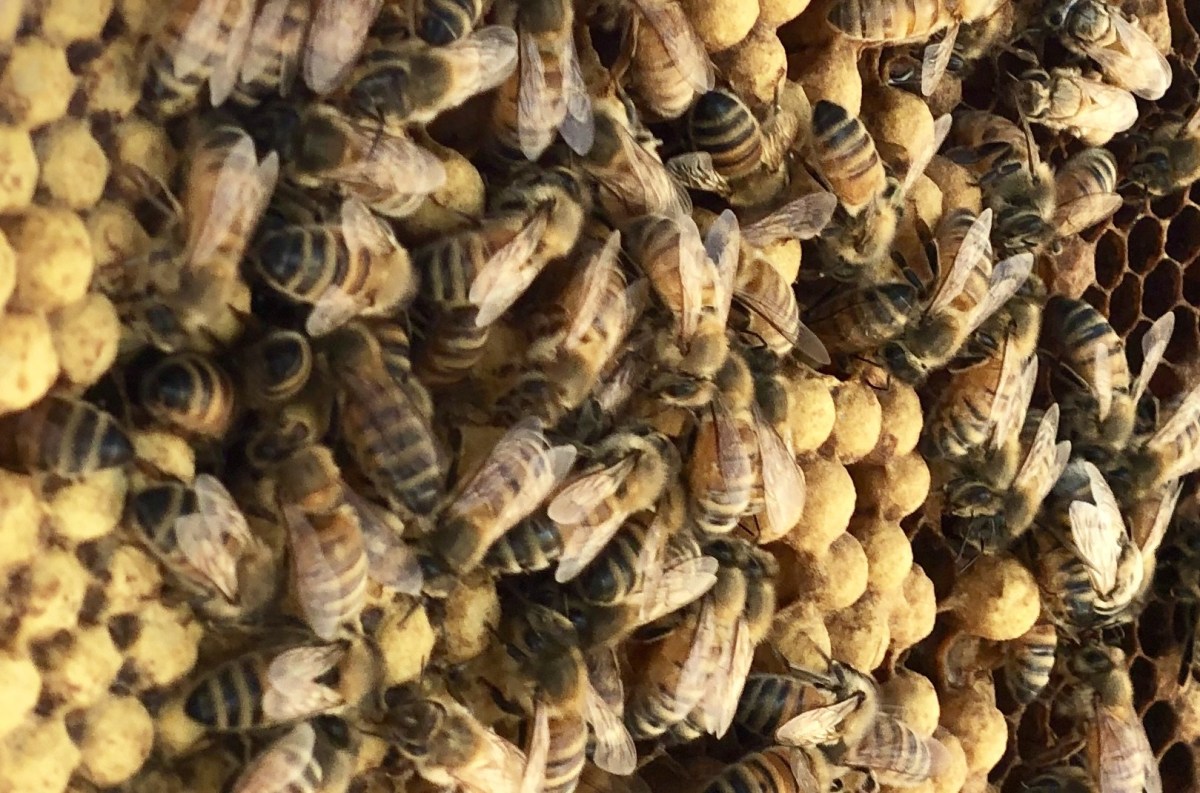 Before I discuss possible solutions, I think it is important to discuss the reasoning for this issue. To recap, a laying worker colony is doomed to fail as they have no way to raise a new queen and they will only produce drones that will speed up the depletion of their precious resources. Why would a colony, which already is in trouble, produce more drones to only quicken their demise? It is a last ditch effort to spread their genetics. In a feral colony, where there is no passionate beekeeper to help them along the way, the laying worker issue means certain failure. So, they do what they can to spread their genetic line far and wide by producing as many drones as they can to go out and mate with virgin queens from other colonies. We have to keep in mind that honey bees are much like a super-organism. Though they work hard to ensure their own colony’s survival, survival of the species is a higher priority.

So what can the beekeeper do in this seemingly hopeless situation? There are several proposed solutions, which I will discuss in the following, but it will be up to you to form your own opinions and take what action you feel necessary.

Some believe that one can simply “shake out” the entire colony on the ground a hundred or so yards away from the colony then replace the hive in its original location. The theory behind this method is that the laying workers are not foragers, therefore, do not know how to return to the colony. Only non-laying foragers will return and be able to care for the brood. At that point, after a couple days of remaining queenless and lack of laying workers, the colony is more likely to accept a mated queen.

In this method, the beekeeper takes brood frames (which include fertile eggs) from other colonies and place them in the laying worker colony. The beekeeper would place a new frame of eggs in the colony once a week for several weeks. The theory is that the pheromones caused by the open worker brood will suppress the urge of laying workers to lay. Over time, the colony will raise a new queen. Once you begin to see queen cells you can either allow them to raise out the new queen or destroy the queen cells and introduce a mated queen as you would during any other re-queening situation.

This method is fairly simple and straight forward. The beekeeper simply combines the laying worker colony with a queen-right colony using the colony combination method of their choice. Much like the above-mentioned method, the presence of open worker brood should suppress the urge of laying workers to lay. If you decide to try this method, I would use a bit of caution. The laying worker colony has enough “queen-like” pheromones that it could cause them to ball the queen of the other colony. An extended combination period (more sheets of newspaper along with use of a queen excluder) can help with the success of this method.

I will share my method, or lack thereof. In my first year of beekeeping, I experienced several serious issues. From colony melt-down due to the Arizona heat to absconding to superseding to, yes, laying workers. When I was presented with this issue, I was ignorant to say the least. I simply introduced a single frame of eggs one day, then did a push-in cage introduction of a mated queen the following day, utilizing heavy smoke. Surprisingly, the method worked. I do not mention this as a means of guidance as what you should do, as this was completely foolish and misguided. However, I mention it to prove a point that no one method is “the” method for correcting a laying worker issue.

So, if you find yourself with a laying worker issue, take a breath and know that all is not lost. Do some research, beyond this article, and decide for yourself which method is most promising to you. If you do not succeed, you have not failed. As every beekeeping experience, positive or negative, is an opportunity for experience and learning.